Ball pythons are not aggressive most of the time, but they may let you know that they want to be left alone at certain times.

Ball Pythons Are More Aggressive at Some Times Than Others

There are a few times in a ball python’s life when it is more aggressive than others.

Knowing when to expect to be rejected by your ball python will help you avoid unpleasant encounters with your pet snake.

A frightened ball python may hiss or coil itself to raise its head off the floor of its enclosure as if to strike.

It is more likely just to resist being handled or to roll itself into a ball, but bites from ball pythons are not unknown.

Here are the times a ball python is most likely to bite.

Ball pythons may seem to become aggressive when they are hungry. The issue isn’t that they want to bite the hand that feeds them.

What is going on is that they naturally strike at and bite their prey before they constrict around it to get it ready to be eaten.

Your nearsighted, hungry ball python may simply mistake your fingers for its dinner.

There are simple ways to prevent nipping and biting at feeding time.

Feed your ball python in an enclosure other than the one it lives in. This way, it will know that picking it up to be taken to its feeding cage is a good thing.

It will cooperate with you rather than fight with you. It will expect its food only when it gets to the other enclosure.

You can leave your snake in its second enclosure for up to 48 hours while it digests its prey, making sure it is appropriately heated and has a fresh air supply.

Or you can gently return your snake to its regular enclosure once it has swallowed its prey.

Offer food to your snake with tongs, not from your hand. This way, if it strikes and misses its mouse, it hits the tongs, not your fingers. It’s also a good idea to wear gloves when you feed your snake.

When a ball python bites the hand that feeds them, sometimes the problem is that it didn’t aim very well.

Ball pythons that suffer a disorder called stargazing have trouble aiming at their food, as do ball pythons that have a hereditary condition linked with genes for unusual colors.

Even the most aggressive ball python is highly unlikely to cause you any real harm when it is feeding.

A ball python won’t try to constrict around a human.

It’s still a good idea to keep a close eye on children under the age of eight and constrictor snakes at feeding time, for the sake of both the child and the snake.

Smelling Something Edible on You

If your pet ball python is hungry, and it smells something edible on your hands, it may get aggressive and strike ay you or even bite you.

Playing with a guinea pig or a hamster, mixing hamburger meat with your unloved hands, or cutting up a chicken leaves a scent of food on your hands and fingers.

Your pet ball python, which doesn’t see very well, can mistake your fingers for food.

Wash your hands with soap and water before you handle your ball python. Change clothes before handling your ball python if they have meat juices or the scent of meat on them.

Or to be extra sure of safety, purchase some snake handling gloves for feeding and picking up your snake. 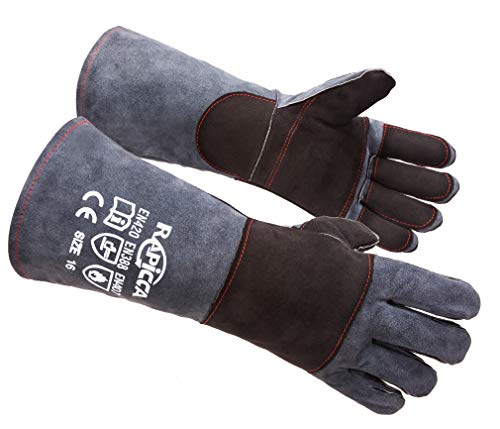 Snake handling gloves protect your hands and forearms from bites from your ball python.

Female ball pythons may lay eggs until they are 30 years old. They usually need to mate with a male before they lay eggs that are capable of hatching.

Female pythons can get aggressive while protecting their eggs from any potential threat. It is best simply to stay away from a female python that is guarding its clutch.

If you need to get something out of your ball python’s enclosure, wear snake gloves.

A female ball python will usually reject food while it is guarding its young, although it will be very hungry when they hatch.

Ball pythons shed their skin every four to six weeks.

For a day or two before and a day or two after they shed, they may be unusually testy and want to be left alone.

You can tell a ball python is about to shed its skin when its eyes turn blue.

The eye color change results from the accumulation of fluid beneath the eye caps, the scales that protect the eyes, to life and separate old scales from new.

Ball pythons with blue eyes can’t see very well, so they may strike at things in their enclosure that they would ordinarily not find threatening.

Make sure your snake’s enclosure has an appropriate level of humidity and leave your snake alone until it completes its shed.

When a ball python is aggressive, the cause is usually one of the reasons listed above. A few ball pythons, however, have naturally aggressive personalities.

These snakes can usually be tamed if you take your time in training them.

Here are some snake handling techniques that may help.

Approach Your Snake Slowly and from the Side

Ball pythons in the jungle aren’t at the top of the food chain. There are many animals that eat ball pythons.

In nature, hatchling ball pythons are vulnerable to attacks by dogs, hyenas, some kinds of frogs and spiders, and other snakes.

Adult ball pythons are eaten by lions, leopards, and especially birds of prey.

In the wild, ball pythons are usually attacked suddenly, from above.

They are neurologically hard-wired to respond aggressively to sudden movement above their heads.

That’s why you always need to approach your ball python slowly, from the side.

Ideally, your snake’s enclosure can be opened from the side so you can remove your snake without upsetting it.

Frequent contact also helps to tame your snake. The more often you handle your snake, the more it will trust you.

But some kinds of contact are better than others.

A ball python is never going to be your friend.

Your ball python may tolerate you, but it will always prefer to be left alone.

Know your snake’s limits and avoid the stress that can make your snake aggressive and ruin the fun you can have with your snake.

Ball pythons are some of the smallest constrictor snakes.

They wrap around their prey to suffocate it before eating, and they may playfully wrap themselves around your arm once they come to trust you.

However, ball pythons are very easy to handle.

An adult female python may weigh as much as 5 pounds (a little over 2 kilos) and measure 5 feet (1.25 meters) long.

Male pythons are smaller when they reach their full adult size. They weigh as little as 3 pounds (1300 grams) and extend just 3 feet (a little less than a meter) long.

Ball pythons get their name from the fact that they roll themselves into a ball when they are threatened or scared.

They put their heads in the middle of their coil and coil themselves so tight that they can be rolled across the ground like a soccer ball or a basketball. (Don’t kick, throw, or try to dribble them.)

These generally timid snakes don’t require a lot of maintenance. They have tiny teeth, just enough to hold onto their food as they are swallowing it.

They almost never bite, and when they do, their teeth usually do not penetrate the skin.

Ball python bites do not trigger tissue damage and usually do not even break the skin.

But How Can I Be Sure My Ball Python Won’t Bite?

You should never adopt any kind of pet you find to be scary.

You should be confident that your ball python is friendly before you take it home.

The best way to gauge the friendliness of your future pet snake is to physically go to the pet shop or reptile show where you can buy a pet snake.

Ask the seller to take the snake out of its enclosure so you can handle it and see how it feels.

People who sell snakes want future buyers to have happy experiences with their snakes.

There is no safer place to get an introduction to your snake than at a pet shop run by a knowledgeable dealer or at a reptile show.

If you buy your snake at a reptile show, chances are that the breeder can tell you a great deal about its personality.

The breeder can also tell you which foods your snake likes when you can expect it to shed, and all about the kinds of experiences it had as a hatchling.