It is not uncommon for dogs to hunt down other small animals, especially birds and rabbits.

Sometimes it’s just a game for them and they don’t even end up eating their victims. Sometimes they do and there might be consequences.

If your dog ate a rabbit, in most cases there should be nothing to worry about.

In that case, a visit to the veterinarian might be necessary to prevent worse outcomes.

What Should You Do If Your Dog Ate a Rabbit?

If you catch your dog eating a bunny, you can intervene immediately to make him stop before he gets crazy ideas like bringing the animal into your home and leaving its dead body on the couch as a present. 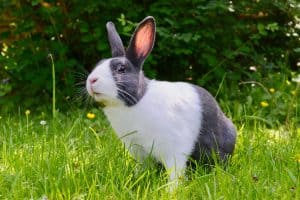 Other than that, the only thing you can do after your dog ate a rabbit is to wait and see if he shows any symptoms of discomfort.

The most common and immediate ones are vomiting and diarrhea, in fact, if your dog is vomiting after eating a rabbit, he might need an urgent medical examination.

Nevertheless, consider that most dogs don’t bear consequences after eating a rabbit.

What should you do if your dog ate a dead rabbit?

Some dead rabbits may carry dangerous infections and parasites, or they could have ingested something deadly like poison, which is now in your dog’s system.

If you witness your dog eating a rabbit that was already dead, don’t waste any time and contact your veterinarian.

If you weren’t present when the dog found the rabbit, you usually can understand if the animal was long dead before your dog killed it just by looking at the state of the corpse.

However, it might not always be easy to recognize or maybe your dog ate a baby rabbit so he swallowed it whole.

In that case, wait and see if any unusual symptom shows up and then rush them to the nearest clinic.

What Could Happen if Your Dog Eats a Rabbit?

Rabbit meat isn’t dangerous to dogs and is actually a great source of protein for your pooch.

Many types of dog food contain rabbit meat, so you can be sure there’s nothing inherently harmful to your pet in this kind of meat.

Eating rabbit meat is only dangerous when the rabbit has parasites or is infected.

Every disease related to eating an infected rabbit should not be underestimated and requires professional treatment.

So if you notice any of the symptoms described in the next paragraphs, you need to rush your dog to the vet.

Although a very rare disease, dogs can catch rabies from infected bunnies if they get in contact with their blood or saliva.

Sometimes, if blood is present in the stools, it will be enough for your dog to eat the pellets to be infected.

This disease affects directly your dog’s brain and can cause fever, seizures, paralysis, unusual aggression, and lack of coordination, among other symptoms. It also more often than not ends up being lethal.

Luckily, all dogs are required to be vaccinated against rabies.

So if you vaccinated your dog following your local regulations there’s no need to worry about this disease.

Tapeworms are white, long, and flatworms whose cysts reside in the muscle tissue of rabbits.

When your dog eats a rabbit infected with this parasite, the tapeworms will reach his intestine and will attach to its walls to feed off your dog.

The presence of this parasite can be found by inspecting your dog’s stools.

Tapeworms usually leave white grain-like pieces on the surface of the stools, which contain their eggs.

If you notice symptoms such as diarrhea, vomiting, weight loss, and lethargy, check your dog’s stool. In the case of tapeworms, your veterinarian will probably suggest a dewormer treatment.

Like many other animals in the wild, even rabbits carry a good amount of fleas and ticks on their fur.

These parasites directly transfer to your dog while he is eating the rabbit.

Not only they will cause incredible discomfort to your pet since he’s forced to scratch and bite his own coat, fleas, and ticks can also carry tapeworms and more dangerous diseases like tularemia and even the plague!

If you’re living in an area full of wild rabbits, it would be wise to provide your dog with a flea collar.

Tularemia, often referred to as “the rabbit fever”, is caused by the Francisella tularensis bacteria and is usually found in rabbits and rodents.

This disease develops by forming masses in the victim’s liver that resemble tumors. Dogs are not among the species most affected by this bacteria, but they can easily be infected.

Symptoms of tularemia are similar to those of flu and include, fever, swollen lymph nodes, and lack of appetite.

Humans can also be affected by tularemia if they get in contact with infected animals.

In fact, this disease is so concerning that if your dog gets diagnosed, he will need to be isolated and his case needs to be reported to the authorities.

Rabbit fleas can also carry the bubonic plague, the same disease that in the 14th century killed almost half of the European population.

Although it’s a very rare disease, every year there are around 15 diagnosed cases of plague in the United States.

The plague bacteria is called Yersinia pestis and its symptoms are fever, swollen lymph nodes, and shivers. This disease can lead to the death of the patient.

What Could Happen if Your Dog Eats Rabbit Poop?

Contrary to popular belief, rabbit poop is not harmful to dogs.

There are two kinds of rabbit poop.

The cecotropes, which look like grapes and that rabbits usually produce at night to eat them again later for nutrition purposes, and the common pellet type, which is the type that dogs usually find.

The pellets have a dark brown/black color and no odor.

It’s not clear what exactly in rabbit feces is so attractive to dogs, but the most accepted explanation is that rabbit poop actually contains a lot of nutrients that often lack in the diet of a dog who is mostly fed with industrial products and dry food.

In particular, rabbit droppings are rich in vitamin B and digestive enzymes that dogs crave.

This happens because rabbits don’t actually fully digest most of the food they eat, so their stools are a great source of fibers, given that they’re mostly made of hay and grass.

However, a dog eating rabbit poop doesn’t necessarily have a diet deficiency of any kind.

The most common risk from eating rabbit droppings could be an unwanted reaction in the digestive system of your dog.

This isn’t specifically related to the droppings, but rather it’s a consequence of ingesting foreign food that is not part of the usual diet of your pet.

Some dogs might have a very sensitive digestive system, but the worst they could get from eating rabbit droppings would be an upset stomach.

In any case, a preventive call to your vet is never a bad idea.

Coccidia is a parasite that can be contracted by ingesting contaminated water, soil, or food.

The dog form of coccidia is dangerous for their health, but luckily this parasite changes for every species.

In the case of rabbits, it’s not unusual for a rabbit to have coccidia and your dog can ingest this parasite when eating their droppings.

However, the rabbit form of coccidia is harmless to dogs and will pass without consequences through their intestines.

More often than not, veterinarians will find traces of coccidia in dogs’ stools, but they will be able to discern the rabbit form from the dog form.

Why Do Dogs Eat Rabbits?

It’s only been around 15.000 years since the domestic dogs we know were born, separating themselves from the wolves.

That predatory instinct that is typical of the wild is still deeply engraved in their DNA.

Not all dogs feel this “call of nature” of course, in fact, it might be stronger in those canines that have been specifically bred to be great hunters, even if they’re home pets and never went hunting before.

Generally speaking, rabbits might just be play things for dogs.

All dogs are attracted to small objects in motion and seeing a rabbit running around can simply be irresistible to them.

How to Stop Your Dog from Eating Rabbits

The only way to get a dog to stop doing something is through proper training.

Teaching them commands like “leave it” or “drop” might be useful not only in regards to rabbits but for whatever ends up in your dog’s mouth that he shouldn’t be eating (and every dog will eat a great deal of potentially dangerous things during their lifetime).

If you don’t have time to train your pooch or you’d rather get the help of a professional, there are many dog training courses and licensed dog trainers you can contact.

Things to Avoid If Your Dog Killed a Rabbit

The damage is done, your dog killed a poor bunny and has either eaten it or left the dead body somewhere in your yard or (worse) in your house.

There are a couple of things you should restrain yourself from doing in order to not make it worse.

What you consider misbehavior, for your dog is simply a natural instinct.

Moreover, dogs have no “mischief permanence”, meaning that if you punish them for whatever they were doing a moment before, they won’t make the connection between your punishment and their mistake.

They will just think you’re acting mean to them for no reason.

The most effective way to avoid this kind of situation from happening again is not through punishment, but discipline.

Train your dog so that he knows what he can and cannot do and he learns to react promptly to your commands.

When your dog attacks a rabbit, especially if it’s a cute little bunny, you might be tempted to save them, but you better leave it.

In some cases, once your dog comes down from its hunting high, he will release the prey themselves because when a dog is well-fed he doesn’t feel the need to eat the rabbit.

No matter how much trust there is between you and your pet, it’s dangerous to try and interrupt your dog during their killing spree; you might upset him or he might lose control and hurt you.

In addition, if the prey struggles to free itself it could potentially harm or infect you, as we’ve seen that rabbits carry diseases that can easily affect humans as well.

Yes, rabbit meat is not harmful to dogs and you’ve probably fed it to them before without even noticing since it’s present in many types of dog food.

Rabbits in the wild represent a minor threat in most cases because if your dog is regularly vaccinated and has a healthy diet, he shouldn’t catch any of the most dangerous diseases related to eating bunnies’ raw meat.

However, parasites like tapeworms are nonetheless dangerous and will require medical treatments that might turn out expensive, so keep an eye out for your dog when he is not at home.

Eating rabbit droppings, on the other hand, will mostly be harmless, except for the occasional stomach ache that should be nonetheless properly taken care of, following your veterinarian’s instructions.

Just to be safe, if you have a dog at home you might want to avoid keeping a pet bunny!