Cats are very smart animals, but they’re also very curious and there is a reason if “curiosity killed the cat” is such a famous proverb. In fact, their instinct to explore their surroundings can sometimes lead to pretty dangerous outcomes.

If your cat ate a rubber band and you’re lucky, it’ll pass through their body with little to no discomfort. On the other hand, there are also several risks related to the ingestion of foreign objects in cats, so you might want to make a preventive call to your vet, just to be safe.

What should you do if your cat ate a rubber band?

Cats are particularly fascinated with strings, hair ties and, rubber bands and even though science has yet to give us a specific reason, we can guess it has to do with how cats in the wild are used to hunt their prey and eat their entrails.

The common string or rubber band is probably the most similar thing to entrails that a cat can found in our home, and their centuries-long instinct does the rest.

Rubber band not yet swallowed

If your cat eats a rubber band or is caught chewing on it, or you saw them playing with it and then all of a sudden the rubber band is gone, the first thing you want to do is to check their mouth and see if it’s still there.

Cats like to play with their ‘preys’ and if the rubber band is yet to be swallowed, it’ll be enough to pull it out, scold your cat (that will most probably ignore you) and you might have just saved a lot of money in medical expenses.

Rubber band stuck in the mouth

Sometimes when a cat ate an elastic string, this gets stuck around its tongue or in some part of its mouth. If it’s safe to remove without forcing or pulling at anything, you may try to remove it yourself.

However, it may be dangerous and you could potentially cause some kind of damage or wounds, so the safest thing to do would be to bring your pet to the veterinarian and let them handle the situation.

Once the rubber band has been completely swallowed, there’s not much you can do to manually help your cat to expel it. In some cases, cats will cough it out or vomit the foreign objects on their own.

It could also pass through their gastrointestinal apparatus without problems, so you need to check the litter box after every use for the first 24 hours since ingestion.

If you notice any abnormal behavior in your cat, whether they expelled the rubber band or not, a medical examination is necessary to prevent the situation from getting worse.

What not to do if your cat ate a rubber band. 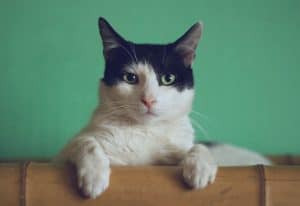 We saw several things we can do in this situation, but there are also a couple of things we must absolutely avoid as well.

As mentioned earlier, the first place you can intervene if your cat swallowed a foreign object, is its mouth.

However, it’s important to keep in mind that if you see a piece of rubber band or string peeking from their throat and already half-down the esophagus, you must not pull at it or try to remove it on your own

The same advice goes if the string hangs out from the anus. If the rubber band has reached the rectum, it should be out naturally within a few hours.

If you pull at it and the rubber is still somehow stuck in your cat’s intestines, you might even open wounds in their guts, with terrible and sometimes fatal consequences.

What could happen if your cat swallowed a rubber band?

The main concern related to ingesting any linear object is about what happens once the item reaches the intestines.

In this part of the body is very easy to cause big damage that may even threaten your cat’s life, that’s why it’s important that you don’t wait for symptoms to just go away on their own.

The two biggest risks when a cat swallows a rubber band are that of intussusception and necrosis.

This complicated word actually means a very easy concept: intussusception happens when a part of the intestines telescopes inside another, causing a blockage.

This condition is very dangerous because the intestines are basically rubbing and scratching against each other, and they may start to tear and open wounds inside your cat’s body.

From there, bacteria and toxins will flow into the bloodstream and go on to cause dangerous infections.

If the rubber band gets stuck around the intestines, not only it will cause a clog that will make it impossible for your pet to ingest any more food, it will also prevent blood from flowing correctly through the organ.

A prolonged lack of blood supply will lead to necrosis of the interested party and the organ will die.

In this case, even surgery may be too late, that’s why the timing is fundamental when your pet eats something they shouldn’t have.

Symptoms to look out for when your cat eats a rubber band.

Contact your veterinarian or bring your cat in for a medical examination if you notice one or more of these symptoms:

The most common sign of gastrointestinal problems. Your cat tries to get rid of the foreign object stuck in their stomach or intestines.

It’s particularly worrying if the vomit has a dark brown color because there might be blood or feces mixed with it, which is a sign of internal bleeding or obstruction deep down in the intestines.

Most cats hate to be touched on their bellies, so it might be hard to recognize this symptom manually, but animals who experience a painful abdomen usually lie in strange positions or even walk in a crooked way.

Loose stools aren’t always a bad sign when it comes to dangerous ingestions, you need to check the litter box regularly to see if your cat managed to push the rubber band out on their own.

Diarrhea should not become a recurring symptom, because it causes dehydration to your pet and if there are repeated instances it means there might be a bigger problem in their intestines.

The other side of the coin is when your cat suddenly stops using the litter box.

If your cat hasn’t used the box for several hours after the supposed dangerous ingestion, there might be an obstruction in their gastrointestinal apparatus that requires immediate medical attention.

Most cats are big eaters just as much as dogs so if your cat suddenly loses interest in food you immediately know that something is wrong.

If your cat ate a rubber band, it might be that they want to eat but are unable to because of obstructions or discomfort.

Loss of appetite shouldn’t be underestimated, especially in the presence of other symptoms such as diarrhea.

These two symptoms combined can cause hypoglycemia which is a very dangerous condition that can quickly turn deadly for your pet.

Cats can sleep up to 18 hours a day, so it isn’t always easy to recognize a normal cat from a lethargic cat.

However, if your cat doesn’t respond to any incitement and avoids its usual playtime, the lack of energy might be due to an ongoing infection or another important issue that could grow increasingly dangerous as time passes, so don’t overlook this symptom.

This is a very ‘personal’ symptom that could vary from cat to cat and only you can figure out if there is something wrong with your pet.

Cats can express their discomfort by biting and growling, especially if you touch them in painful areas. If your cat suddenly reacts aggressively to the usual cuddles, it might be their way of expressing an internal problem.

How many times have you seen your cat try hard to clean the top of its head with its paw? The first thing a cat does when feeling dirty or uncomfortable is to either lick the spot or rub it with its paw.

If you see your cat having this same behavior directed at their mouth or jaw, the rubber band or item they ingested may be stuck around the base of their tongue. 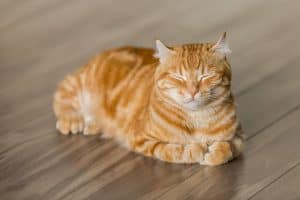 Cats should never eat rubber bands. Even though there might be chances that the rubber band will pass through without causing any harm, the risks are too many.

Prevention and quick intervention are the only ways to save your cat’s life.

Any object that you know your cat might find interesting enough to chew on should be kept away from them.

Cats should only play with safe toys designed specifically for their needs.

If your cat eats something dangerous, you should always speak to your veterinarian first thing. Even if they don’t show any immediate symptoms, never underestimate the situation. It’s better to be safe than sorry.