When you have a dog you get used to all the weird things your pooch ends up putting in their mouth sooner or later, but maybe you never expected your dog to start eating the walls of your house.

If your dog ate drywall, a preventive call to your veterinarian is always a good idea. Although most of the time drywall doesn’t entail dangerous consequences, there are some exceptions that should be taken into consideration.

What should you do if your dog ate drywall? 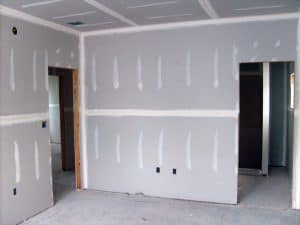 Most pet parents don’t report particular incidents related to their dog eating drywall. It’s unlikely your dog will eat a big chunk of sheetrock at once, so it should be able to pass through without problems.

However, this isn’t something that is part of your dog’s diet and as with any other non-edible item, the danger is always around the corner. There have been cases where some dogs have died as a consequence of eating drywall.

If your dog ate sheetrock and is showing unusual behavior or discomfort, with symptoms such as coughing, vomiting, breathing difficulty, or any other abnormal sign, don’t hesitate to call your veterinarian or the nearest emergency clinic.

Side effects of eating drywall.

When a dog eats drywall, they might experience a range of symptoms that on average shouldn’t go beyond a minor discomfort or stomachache.

However, some dogs might be more sensitive or allergic to some components of the drywall, which might trigger unpredictable reactions that in some cases may be fatal.

It’s unlikely that anyone would get their dog tested for drywall allergies in advance and not all dogs have this habit of chewing on walls, but if you notice that your dog chews walls routinely, better be safe and take measures so that it doesn’t happen again.

One thing we can be sure of is that long exposition to drywall dust will be as damaging to your dog as it would be to humans, so you need to be careful and keep drywall in a good state to avoid dispersion of dangerous chemicals. 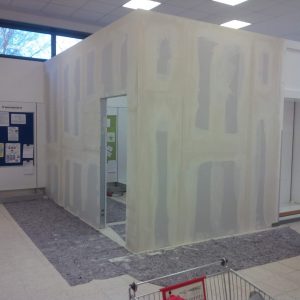 Some dog deaths related to drywall toxicity are probably due to the remaining Chinese drywall scattered across the United States.

The story of this drywall has all the characteristics of an urban legend, but it’s actually an environmental health issue that still comes back to haunt pet parents every now and then.

What makes the so-called Chinese drywall so dangerous is the presence of pyrite, whose oxidation creates a sulfur compound that only gets more harmful the longer one is exposed to it.

A dog chewing on walls with this component can quickly become intoxicated even if the pieces of drywall ingested don’t cause any blockage.

Dogs that have died because of drywall poisoning often didn’t show anything abnormal inside the body and yet had very serious symptoms that were often overlooked, notably stomach swelling and vomiting.

Chinese drywall was used in the construction of more than 100,000 homes between the years 2001-2009. If you bought a house built during those years, you might want to get a sample of your drywall analyzed.

Why do dogs eat drywall?

Dog eating sheetrock may do so because of a variety of reasons which can only be assessed by a professional. If you notice this recurring behavior in your dog, please contact your veterinarian and get your dog examined.

These are some common reasons behind wall-chewing in dogs. Please remember these are only suggestions and should not replace professional consultation.

A puppy chewing walls might do so because they have associated the room with a scary event, like a storm or fireworks. This behavior is common in adult dogs too.

If your dog experiences something traumatic while closed inside a room, they will try to get out by scratching the walls and may end up ingesting pieces or inhaling dust while doing it.

This behavior doesn’t necessarily disappear once the threat is gone as the trauma lingers and pushes them to behave in the same way even when there’s nothing to be scared of.

Some dogs become overly-attached to their owners, to the point where being separated from them even for a short period of time becomes a cause of distress for them.

Your dog might start eating drywall in an attempt to reach you when you’re out of the house or even when you’re in the house but in a different room.

Some small creatures like termites, rats, or lizards might be living inside your walls even if you’re not aware of it and they don’t cause any visible harm to your home.

However, dogs have highly superior senses that will make them locate these animals even through the walls. Their hunting instinct kicks in and you find them poking holes in the walls trying to reach their prey.

Some dogs associate eating drywall with getting a reaction from their owner because the latter will probably try to distract them from eating the wall by playing with them, feeding them, or taking them for a walk.

In this way, whenever the dog is looking for that kind of reward they will start eating the wall, hoping to get a reaction from you.

When a dog doesn’t play, exercise, or interact with the family enough for the amount of energy they have, they might get bored.

If your dog is under-stimulated and doesn’t have toys to play with, they might look for entertainment elsewhere and end up developing destructive behavior that can only escalate if you don’t find another outlet for their energy.

Pica is a condition that can only be properly diagnosed by your veterinarian. Dogs affected by pica will feel the compelling need to chew and eat non-edible items.

Pica may be a psychological condition, but it can also stem from preexisting medical conditions or a poor diet.

If your dog regularly eats things like cloth, plastic, paper, drywall, or other non-edible things, they will need to be seen by a professional.

How to stop dogs from eating drywall.

It is necessary to stop dogs from eating drywall because even when it happens to be harmless, it is not good for their body and a potential health hazard.

Identifying the cause of the problem will be the first step to stop this destructive behavior.

A tired dog is a dog that won’t eat your walls. Your dog might be wall-eating because at the end of the day they still have too much energy.

Not to mention, chewing releases endorphins, which have a calming effect that your dog needs.

Exercise is another way for your dog to release the endorphins he very much craves. Try to tire your dog more by taking them on long walks and buying them suitable toys for playtime.

If your dog is a big chewer, it doesn’t necessarily mean there is a bigger problem behind their behavior. It also doesn’t mean they can ruin the walls of your house.

Providing them with a good chew toy designed for their size and jaw strength will both solve your problem and give your dog a form of entertainment that keeps them away from danger.

Dogs have a strong sense of smell and won’t go near something that has a repulsive scent for them.

On the market, you can find so-called “dog repellents” that you can use on things you don’t want them to bite or eat. They’re completely harmless for your pooch and are a good and cheap solution if you don’t want to go for professional dog training.

One of the most used spray repellents is the bitter apple spray, which has been used for a long time to stop destructive behavior in dogs.

If you suspect that the destructive behavior of your dog is due to separation anxiety or other psychological conditions, it will be wise to do a medical examination to confirm the diagnosis and decide how to proceed.

Treatments for psychological issues include changes in habits or diet, professional training, medication, or a combination of different therapies.

The healing process for psychological issues will take time, but it’s important that you always treat your pet with your utmost kindness and love because violent methods will only make the problem bigger and won’t be effective at all. 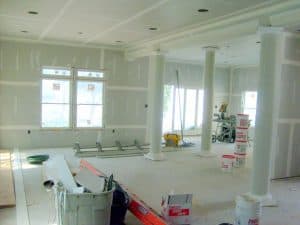 Anything that isn’t part of a healthy diet is a big no for your dog, drywall included. Although seemingly harmless, there have been serious cases of diseases and even death as a consequence of ingesting drywall.

Eating sheetrock might also be the sign of an underlying issue, so it shouldn’t be overlooked and it’s always better to contact your veterinarian if you notice this behavior in your pet.

Please don’t scold your dog if they ate drywall. They won’t make the connection between the bad deed and your scolding and if they’re eating drywall because of a psychological issue, you may be making it worse.