Fish bones can be innocuous or really insidious and there is no way to know beforehand the kind of damage they could cause.

Unfortunately, not all dogs swallow fish bones without consequences, so it’s important to keep an eye on your dog to see if they have any symptoms.

And in case they do, call your vet emergency number immediately.

What Should You Do If Your Dog Ate Fish Bones?

In the case your dog ate fish bones, you can do some considerations: how big is your dog, and how big were the fish bones he ate? 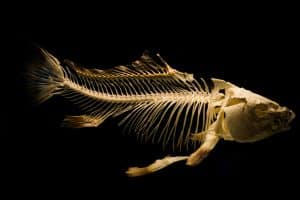 If a big dog eats very small fish bones, he might be able to pass them without problems.

A small dog eating big or long pieces of bones might be risking his life.

The only thing you can do is wait and see if he start feeling any kind of discomfort.

If that’s the case, don’t wait for the symptoms to get worse and call your veterinarian to see what needs to be done.

What You Shouldn’t Do When Your Dog Eats Fish Bones?

The first thing you must avoid is inducing vomiting.

Fish bones are dangerous because they might scratch the insides of the digestive system, but if they went down just fine and your dog tries to cough them up again, you put them at risk of hurting themselves.

Prevention is actually the best thing you can do in this kind of situation because once your dog swallowed a dangerous item, there is always a fair chance something can go really wrong and you may be powerless.

You should keep sharp things and especially bones away from your dog, as dogs are naturally drawn to bones because of the smell of food that lingers on them.

What Could Happen If Your Dog Swallowed Fish Bones?

Fishbones are small, brittle, and sharp. Much like toothpicks, they pose a real threat to your dog’s life.

The first risk is that of your dog suffocating upon eating the bones.

This is especially true for small dogs that don’t have a big esophagus. A bone stuck in a dog’s throat will prevent them from breathing properly.

If the bones manage to pass the esophagus, they will reach the stomach and intestines, posing a different kind of threat and one that isn’t immediately detectable.

As weird as it sounds, a blockage is probably the best worst thing you can expect in this situation.

A blockage happens when a foreign object gets stuck somewhere in the digestive system, usually the stomach or the latter part of the intestines, and depending on the spot it can cause difficulties in eating or expelling the feces.

Sometimes this problem goes away without the need for medical intervention, but it can also turn into an expensive medical surgery to remove the object.

Fish bones, with their sharp edges, might poke holes or open wounds in the walls of the intestines, causing the gut bacteria to flow into the bloodstream and go on to cause dangerous infections.

The peritoneum, which is the thin membrane of the abdominal cavity, might become inflamed because of these infections, causing a disease called peritonitis.

Peritonitis is a life-threatening illness that must not be overlooked.

Dogs who suffer from peritonitis usually show abnormal behavior, like assuming weird positions while lying down or showing discomfort when someone touches their belly.

If you notice any unusual behavior after your dog ate fish bones, rush them to the nearest clinic.

Symptoms of Bone Stuck in a Dog’s Stomach

When dogs eat raw fish bones, they may start showing discomfort immediately, a few minutes later, or even several hours later, depending on where the fish bones are causing discomfort.

Usually, they show the clearest symptoms when the bones have already passed the esophagus and have reached the stomach.

Some dogs might digest fish bones without ever showing any sign of discomfort, while others may not be as lucky.

If you know that your dog ate fish bones, it’s important that you keep them close for the following hours (even days) and that you check their stools regularly.

If you notice anything out of the ordinary, bring them in for a medical examination as soon as possible.

Fever is usually the sign of an ongoing infection.

Your dog’s body is trying to fight the infection by raising the temperature to kill the bacteria.

When your dog eats fish bones, an infection might mean they’re developing a form of peritonitis, so make sure to check your dog temperature regularly.

If your dog looks like they’re trying to cough something out or they’re straight up vomiting, they might be trying to get rid of the bones stuck in their esophagus or stomach.

Check to see if they managed to get rid of all of them, but even if they did, it would be better to contact your veterinarian, because while coming back up the fish bones might have opened some wounds in the digestive system.

If the fish bones opened wounds in the stomach or intestines, you will notice blood in the vomit or the stools.

While it may be obvious in the vomit, stools that contain blood are usually dark brown or black.

If you notice blood, your dog needs to be examined immediately.

Your dog’s gums are fully pink in healthy conditions, but that also depends on the dog so no one other than you can know what your dog’s normal gums look like.

Usually, if dog gums take on a pale pink or white shade, there is a problem.

Pale gums may signal many different diseases from anemia to heart failure.

When it comes to the ingestion of foreign objects, pale gums are related to internal bleeding or even diseases linked to infections, like kidney failure.

If your dog shows aggressive behavior or it’s not safe to check their mouth, you can check their inner eyelids instead.

Dogs are usually big eaters, so if they suddenly stop eating or they eat less than usual, it’s easy to understand that there’s something wrong.

Lack of appetite in dogs may be caused by something stuck in their esophagus or stomach that prevents them from eating.

It may also be a sign of gastrointestinal occlusion and may cause dehydration, anemia and general weakness, or even fainting.

If your dog shows discomfort when you touch their belly or if they try to lay down or sleep in weird positions, they might be experiencing abdominal cramps due to gastrointestinal obstruction or infections.

Although this symptom might be hard to spot and very easy to overlook and dismiss, if you know that your dog ate fish bones in the previous hours or days, make a preventive call to your veterinarian.

No, dogs can’t eat fish bones because they can easily turn into a threat to their lives and even in the best-case scenario they will cause a lot of pain and discomfort to your pooch.

Dogs should never be allowed to eat fish bones, and most importantly should not be able to find fish bones laying around the house or wherever they can easily reach them.

It’s your responsibility as a pet parent to keep dangerous things out of your pet’s reach.