What Should You Do If Your Dog Ate Raw Bacon?

Bacon is only one voice in the list of things dogs seem to find irresistible. However, like many other things dogs love, it isn’t always good for their health.

If your dog ate bacon, you need to check how much bacon they managed to swallow because eating a big amount of this food may be harmful to your dog, in fact, if this happens you should immediately call your veterinary and ask for assistance.

What should you do if your dog eats raw bacon? 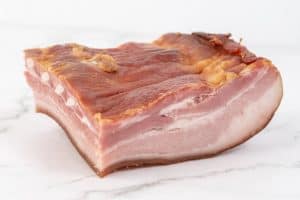 If bacon is regularly present on your dining table, your dog will eat it sooner or later. No food left unsupervised is ever completely safe from your furry companion, it will be enough to turn around for a second to see your bacon magically disappear from your plate.

If your dog eats raw bacon, first of all, you don’t need to panic. There are much worse things a dog could eat and that would represent an immediate threat to their life. Luckily, it isn’t the case for raw bacon.

You should quantify the amount of bacon your dog has eaten. If your dog ate a piece of bacon, they should be fine and it will be enough to keep an eye on them for a few hours and see if there’s anything out of the ordinary in their behavior.

If, however, your dog snatched a whole bunch of bacon strips from the table before you could stop them, they’re at risk of developing internal inflammations or infections. In this case, a preventive call to your veterinary is a good idea.

What happens if a dog eats raw bacon?

Raw bacon is not toxic for dogs, however, this doesn’t mean that it’s safe for them to eat. This product comes from pork, which is full of fats, and it’s also processed with a lot of salt. Fats and salt are two things that shouldn’t be part of your dog’s diet because they’re as dangerous for them as they are for humans.

The main concern about a repeated consumption of raw bacon in dogs is related to pancreatitis, a disease where the pancreas becomes inflamed and might be unable to execute its functions properly.

The pancreas helps your dog digest the food and produces a hormone called insulin, which helps regulate the sugar levels in the blood by allowing your dog to use the glucose from the carbohydrates they ingest with food.

When the pancreas is unable to produce insulin or doesn’t produce enough insulin to regulate blood sugar properly, your dog might develop diabetes mellitus, which is a lifelong disease that is particularly difficult to manage in dogs and might shorten their lifespan considerably.

Another problem related to raw bacon is that eating raw pork puts your dog at risk of contracting trichinosis, a parasitic infection that can affect dogs and humans alike when they eat undercooked or raw meat, especially muscles.

This infection takes its name from the Trichinella spiralis worm, which once ingested continues to live inside the animal and even produces larvae that start migrating throughout the body and can stay hidden for years.

This infection is hard to detect in dogs and even harder to treat, therefore prevention is the only way to be safe.

Both these diseases will require medical examinations and if your dog develops diabetes as a consequence of chronic pancreatitis, things can get really expensive because we’re talking a lifetime treatment.

Signs to look out for if your dog ate raw bacon.

When dogs or puppies eat bacon, the first signs of discomfort usually show up after just a few hours from ingestion. It’s important that you don’t underestimate any of these symptoms because the sooner your dog gets treated the less likely that they will develop more dangerous diseases.

Please call your vet immediately if you see any of the following symptoms:

– Vomiting: maybe the most obvious sign that something is not quite right. Your dog might be trying to get rid of the bacon they ingested several hours before, but it’s unlikely they will manage to do so if they already digested it. However, this means the bacon is giving them troubles in the gastrointestinal apparatus. Call your vet.

– Abdominal pain: your dog might be walking in a strange way or may react painfully when you touch their belly. These are signs of abdominal pain, which means that what they ate probably caused inflammations in the intestines. You should have your dog examined as soon as possible.

– Lethargy: this is a sign that your dog doesn’t feel well. If your dog sleeps a lot and is uninterested in activities they usually like, for example playing or going for a walk, it might be due to sore muscles or fever, which is an alarm bell for infections. Don’t waste any time and get in contact with your veterinary.

– Diarrhea: when this symptom appears suddenly it’s always due to a dietary problem or to infections provoked by a wrong diet. This can also be your dog trying to get rid of the bacon, so you should check the stools and see if they managed to expel it successfully. Even if they do, calling your vet is still a good idea, just to be sure everything has gone back to normal.

– Muscle pain: if your dog looks weak, has swollen muscles or difficulty swallowing, they could have an ongoing parasitic infection that is damaging their skeletal muscles. Infections like trichinosis, as we mentioned, are hard to diagnose, so it’s important to pay attention to these signs and to get in contact with your veterinary as soon as you notice something unusual.

How to prevent your dog from eating raw bacon again. 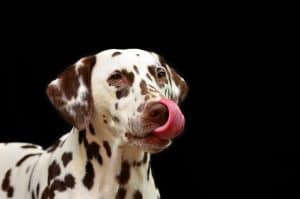 A healthy lifestyle for your dog starts from healthy habits, not only those of your dog but yours as well.

You can train your puppy so that they know the boundaries of the house, for example, they should never jump on your dining table and steal food from there. Remember that whatever you’re unable to teach your dog when they’re little, you won’t be able to teach when they’re adults.

However, their instincts might win over their upbringing, or maybe you adopted an adult dog that is hard to train properly. Therefore the safest way to prevent your dog from eating things they’re not supposed to eat is to keep those things away from your pet.

Sounds easy? It’s actually harder than you think because it means you’ll need new habits too. You’ll have to keep dangerous food out of their reach at all times and if you can’t help it, you should keep your dog away from the room while you’re handling it or make sure you never leave them unsupervised when there’s food on the table.

Raw bacon won’t put your dog in an immediate life-threatening situation, but it’s not a safe food for them.

The occasional strip of bacon stolen from under your nose will probably not cause many troubles to your pooch, but it’s important that it doesn’t go beyond that.

Ingesting a big amount of raw bacon, or worse, repeatedly and regularly giving raw bacon to your dog will ruin their health in the long run, so please keep in mind to always make responsible diet choices for your pets.