As a pet owner, and especially with dogs, one of the most common phrases to come out of your mouth will always be “spit it!”.

Our furry companions will not miss a single chance to get their paws on anything they find appealing for their stomachs and more often than not, your dog will eat things that just aren’t supposed to be eaten, such as non-food items.

If your dog ate a popsicle stick, the first thing you want to do is to call your veterinarian and see what needs to be done.

In fact, there are many things that could go wrong if your dog swallowed a popsicle stick.

For example, he could suffocate or the item could get stuck somewhere in his digestive system or it could cause further unpredictable damage.

What Should You Do If Your Dog Ate a Popsicle Stick?

The first thing to do whenever there’s a situation you’re not sure how to handle is to call your veterinary and inform them of the situation. 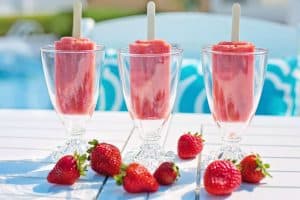 If your dog happened to eat a stick but there are no immediate symptoms of discomfort, your vet will probably recommend letting them eat something bulky to help the stick pass through.

If a check-up is not deemed necessary, you’ll be asked to monitor your pet and see if there’s anything abnormal in their behavior.

Some symptoms to look out for should be vomiting, bloody stools, diarrhea, lack of appetite, lethargy, and anything out of the ordinary.

What Could Happen If Your Dog Swallowed a Popsicle Stick?

There are many factors to consider when you find out your dog ate an ice pop stick.

First of all, depending on the size of the stick and on the size of your dog, they might have no problem swallowing it or, on the other hand, it could potentially be a choking hazard.

Dogs like chewing on things, so there’s a fair chance the stick isn’t going down whole and in that case, there shouldn’t be much to worry about.

The stick will be at least partially digested and it will be enough to check your dog’s feces in the next 24-48 hours to see if it reappears.

It’s drudgery, I know, but this is the best-case scenario because if your dog doesn’t eliminate the stick through vomit or poop, there might be other problems.

Risks of Eating Sticks for Dogs

There are two main risks for dogs when it comes to popsicle sticks and they are poisonous wood and piercing sticks.

Sticks are usually made of wood, but there are many different types of wood and some of them could be potentially poisonous for your pup.

Applewood, for example, is especially toxic for dogs as it contains high levels of cyanide.

It should be ingested in large quantities in order to be deadly, but you still might want to check with your vet even if it’s just one stick.

Unfortunately, it’s hard to tell which type of wood it might have eaten, so whether it’s a popsicle or your dog ate a corn dog stick, make sure to keep a close eye on your pooch to see if there’s something out of the ordinary.

The most common risk of eating popsicle sticks for dogs is that if not chewed thoroughly or if the stick has sharp edges, it could scratch the inside of your dog’s mouth or cause damage to their stomach and intestines.

A sign to look out for is the presence of blood in the vomit or in the feces. If that’s the case, you need to contact your vet immediately.

However, that’s the worst-case scenario. Dogs eat weird stuff all the time and there are mostly no relevant consequences.

Dogs chewing and eating on random stuff are just dogs being dogs and puppies, in particular, have a tendency to sink their teeth into whatever they find.

This behavior is completely natural and there’s usually nothing to worry about.

On the other hand, if your dog starts chewing or eating things such as sticks all of a sudden and on a regular basis, it might be a sign that something is wrong with your pup.

These are some of the reasons why your dog is eating sticks:

Even if eating sticks and other things isn’t something your dog has developed only recently, it doesn’t mean it’s more acceptable.

If your pet is eating something they’re not supposed to be consuming, they might have a behavioral problem.

When adopted as puppies, it’s our responsibility to make sure they grow up following healthy habits, which include learning what they’re allowed to eat and what they’re not.

If you adopted an adult dog, it might be harder to stop them from doing something they’ve done for years. But it’s not impossible.

In this case, professional training could be of help.

How to Prevent Your Dog from Eating Popsicle Sticks Again

The only way to avoid all the aforementioned problems is, of course, to prevent your dog from eating what they’re not supposed to.

Here are a few pieces of advice on how to do it:

Dogs eat a lot of things they’re not supposed to eat and it’s not always possible to prevent them from doing so.

If your pooch happens to eat a stick but isn’t showing any weird symptoms, don’t panic and monitor the situation for a while.

Of course, you should always call your vet and make them aware of the situation as early as possible.

They know the medical history of your dog and will give you instructions on how to proceed and what symptoms to look for.

If the stick was chewed properly or if your dog only swallowed part of it, stomach acids should do the rest and there should be no consequences.

Instead, if you notice anything abnormal about their behavior or if there are vomiting and bloody stools, your pet will most likely need to be examined and you should contact your vet immediately.

Remember that whenever you’re in doubt, calling your vet is always the first and safest option.