My Dog Ate A Stick Of Butter: What Should I Do Now?

Will butter hurt a dog? 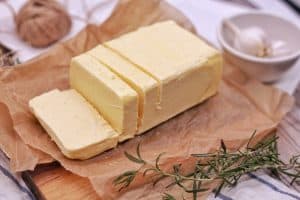 The short answer is: yes. Generally speaking, dogs shouldn’t eat butter as they are mostly lactose intolerant and dairy products should just not be part of their diet.

In some cases, they might end up eating the butter wrapper as well, which is the one thing you should immediately look out for, as it could be a choking hazard or cause gastroenteritis.

However, even if a dog eats a stick of butter, this won’t immediately put their life at risk. In fact, depending on the amount and type of butter, it might not affect them too severely.

What happens if a dog eats butter?

If you’re a dog owner you’re well aware that most dogs will eat anything, anywhere and at any given time, and preventing them from doing so is not always easy, as we can’t keep an eye on them 24/7 (also, some of our furry friends are really quick and smart swindlers — those darn big puppy eyes!).

Sometimes (actually many, many times) they will get their paws on something they aren’t supposed to eat and we should be prepared to deal with the situation in the best possible way.

For some foods, like chocolate, it is mandatory that we make sure our dogs don’t ever come in contact with them because they’re toxic and extremely dangerous.

Luckily, most foods aren’t as life-threatening. In fact, dogs eating butter happens all the time and if butter were lethal, it would be a catastrophe.

So what happens when dogs eat butter? Even if butter itself is not toxic, the first thing you can expect after your dog ate a bit of butter is a bloated stomach and loose stools for a few hours/days after that.

Butter contains a higher quantity of salt that we might realize and that is just not good for anyone’s health, humans and dogs alike. Furthermore, butter is also full of oils that your pet will have a hard time digesting. 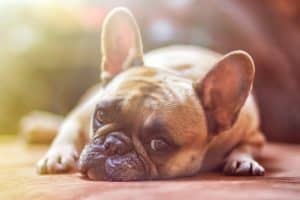 The most dangerous component of butter is probably the amount of fat it contains. Not only dogs have many difficulties digesting fats, but it can also lead to health problems such as for overweight.

Dogs that are overweight will slowly but surely become lethargic and won’t be able to move, run and play as much as before. Problem is, dogs love to do all of that and not being able to do it anymore can cause them depression.

Of course, overweight dogs are at risk of all the other weight-related health issues as well, such as diabetes. These illnesses will decrease the lifespan of your pup so it’s important that you do everything in your power to prevent them.

If your dog ate butter and is throwing up, that might be a sign of gastroenteritis, which is an inflammation of the digestive system, specifically stomach and intestines. Other symptoms might include cramps and diarrhea and it’s a severe condition that means your pooch ate way too much butter and requires immediate assistance.

If the butter has become part of your dog’s diet (for example, you’re used to giving them butter treats on a daily basis) or if your dog ate a big amount of butter in one go, there’s also a risk of developing pancreatitis.

The pancreas plays a key role in our bodies as well as those of our dogs, not only because it produces hormones such as insulin, which is fundamental to assimilate some food components, but also because it’s responsible for the production of a number of digestive enzymes.

When the pancreas is inflamed, the production of hormones and enzymes doesn’t stop, but it’s impossible for them to carry out their function as they found themselves locked inside the organ. Unfortunately, this means these enzymes will try to “digest” the pancreas itself and start attacking it from the inside. This can lead to a number of health issues, all of which might badly compromise your dog’s overall health.

Eating butter isn’t the only reason why this kind of illness might develop in your dog. Unhealthy eating habits are usually the main reason behind most serious diseases and that’s why it’s important to control what our pets eat.

What happens if my dog ate the butter wrapper?

If your dog ate the butter wrapper but isn’t showing signs of suffocation, don’t panic. Butter is full of fats and the grease probably helped the wrapper down your pup’s throat and into their digestive system. It might reappear in their feces or in their vomit soon enough.

Unfortunately, sometimes this might not be the case and the wrapper might form some kind of clog.

Given that it’s better to be safe than sorry when you’re not sure whether the wrapper was eaten or not, it’s better to call your vet or the designated emergency number and ask for advice. In some cases, wrapper-eating might require a medical examination.

My dog ate peanut butter, should I worry?

Peanut butter works like a spell on dogs. They just love it and they probably learned to recognize the sound of the jar opening just so they can magically appear beside you every time you’re trying to make a sandwich.

This kind of butter is mostly safe to eat for dogs and it actually contains a healthy amount of proteins and vitamins, but you still need to take into consideration all the risks related to eating butter for your pup and as such, peanut butter should never be more than a seldom treat and should not become part of your dog’s daily diet.

The healthiest option would be making your own peanut butter at home. That way, all ingredients will be controlled and you will avoid feeding too much salt, sugar or other dangerous additives to your pooch. Instead, if all of your peanut butter comes from stores, one thing you should absolutely look out for in the ingredients is the presence of xylitol.

Watch out for xylitol

Xylitol is an industrial sweetener that is sometimes added to this kind of butter in place of sugar and it is toxic to dogs. Its consumption causes an extreme increase in insulin release, which in turn can cause hypoglycemia as quickly as 15 to 60 minutes after eating the butter. Hypoglycemia is a condition where the sugar levels in the blood drop extremely low. In severe cases, it can be the cause of sudden death.

Symptoms of hypoglycemia include confusion, tremors, staggering, weakness, fatigue and seizures. If you think your dog might have ingested anything containing xylitol or if they show any of these symptoms, contact your vet immediately.

Luckily, xylitol is easy to avoid, it’s enough to read the ingredients chart carefully before buying, so don’t be afraid and let your pup get their sweet sweet treat every now and then!

My dog ate cocoa butter, what should I do?

Cocoa butter is nothing more than the fat extracted from the chocolate liquid. Chocolate is absolutely toxic to dogs and should never, under any circumstances, be fed to them.

Cocoa butter and baking chocolate, in general, contain high amounts of theobromine, which is very similar to caffeine. In the best-case scenario, theobromine will make your dog sick and in the worst, it will cause crazy heart rates, seizures and could also be fatal.

If your dog ate cocoa butter, timing is essential. You should immediately get in contact with your vet or call the local number designated for animal emergencies.

Our pups will always try to eat anything that looks or smells good to them, but that doesn’t mean they should be eating that and even if it’s hard, we shouldn’t let ourselves be fooled by their cute antics.

Remember that they’re not always aware of what’s good for them, but we are and we have the responsibility to make sure they keep us company for long, long years to come.

Butter shouldn’t be part of your dog’s diet, but if for whatever reason you really can’t do otherwise, it can still be a tasty treat, as long as it’s given in small amounts and it doesn’t become a habit.

Be sure to always check the ingredients chart and avoid any food that includes components that you know to be toxic for your pooch.

Every dog is different and no one knows your dog more than you. Before feeding them with anything that isn’t more than safe, you might want to give a call to your vet and check with them if it’s okay for your dog to eat that certain food.

You never know when taking an extra-step might be saving their furry lives!