Can You Use A Live Rock In A Freshwater Aquarium?

Live rocks can be stunning additions to your aquarium thanks to their fascinating variety of shapes, textures, and colors, plus these rocks don’t only serve an aesthetic purpose but they are also natural water filters.

If you’re wondering whether you can use live rocks in a freshwater tank, the answer is no, because immerging a live rock in freshwater not only will kill all the living organisms on it but it will also completely nullified his purpose.

What is a live rock for aquariums? 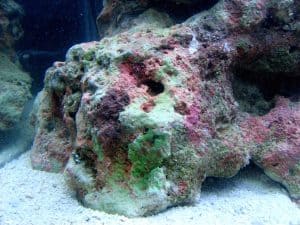 Despite their name, live rocks are not living creatures per se. They’re not “alive”, but rather become the home of different reef creatures. In fact, when we talk about aquarium living rocks we refer to those rocks taken directly from the ocean, usually from coral reefs.

These rocks would be normal stones, but the time spent on the ocean floor allowed living organisms to sediment on their surface, forming shapes and holes where ocean creatures can find refuge.

Some of these rocks are literally born from the ocean, specifically from the remnants of dead corals skeletons, and when taken straight from the ocean they’re also often covered with coralline algae.

Dry rocks, or base rocks, are live rocks that have no life growing on or inside them. This is usually what happens when you take a live rock out of its habitat or when you don’t take care of his ecosystem properly.

They’re often used as filler decorations and sometimes preferred to live rocks because they’re much cheaper and they might be colonized by the microorganisms in your aquarium becoming live rocks themself.

Why should I use live rocks in my freshwater aquarium?

There is no specific need for live rocks in freshwater tanks and they have no purpose beyond decoration.

Live rocks come from the ocean and they are most suitable for saltwater tanks. In fact, all the organisms that might live on the surface of the rock can only be kept alive by saltwater and would absolutely not survive in freshwater.

However, a “dead” live rock or dry rock can be used in freshwater tanks as well, though it might not be the safest option for your aquarium environment. 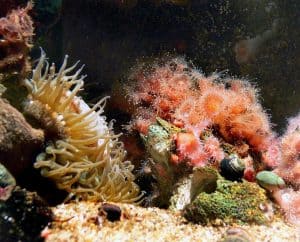 It’s in saltwater aquariums that live rocks can be exploited to their full potential.

These rocks serve as a biological water filter that successfully processes waste and by releasing calcium carbonate they help stabilize the pH in the water chemistry.

On top of these fundamental properties, the colorful coralline algae that usually cover this kind of rocks makes a beautiful addition to your aquarium landscape.

Live rocks for aquariums are highly in-demand on the market and are sometimes the reason why some hobbyists decide to convert their freshwater tank into a saltwater one when their freshwater environment is gone.

If that’s the case, remember to place the live rocks inside your tank at the end just like you would do with your other marine animals. One common mistake among first-time reefers is to settle live rocks on the bottom of the tank before filling it with water.

The micro-ecosystems of live rocks can’t survive outside water; moreover, if you don’t mix freshwater with salt before filling the tank, you might just kill everything that lives on your live rocks by pouring fresh water over them.

Are there any safe freshwater live rocks?

Live rocks aren’t among the safest rocks for freshwater aquariums because the organisms inhabiting the rock will soon die out and contaminate the water along with their bacteria and algae, which is exactly the opposite of what this kind of rock should be doing in your aquarium.

You can easily purchase dry rocks online, but they still won’t be a healthy choice for your fish tank because the coralline skeletons are made of aragonite, which is a form of calcium carbonate that will make your water very hard and not easy to live in for your freshwater animals.

Sure you can buy specific filters and clean the tank regularly to get rid of these components, but why would you put yourself through the trouble when there are many beautiful rocks that would fit perfectly in your freshwater aquarium.

Types of rocks for a freshwater aquarium

If you’re looking for rocks for your fish tank, you’ll be spoilt for choice. They’re the favorite decoration of most hobbyists and you don’t need to have a reef tank to enjoy some beautiful rocky scenario inside your aquarium.

There’s a wide variety of charming stones for freshwater aquarium owners as well:

You can choose the type that betters fits your aquarium environment, but that’s not the only thing to take into consideration.

How to choose your aquarium rocks

Anything that goes inside your aquarium needs to be chosen carefully. Even simple decorations are still pieces that will remain on the bottom of your tank for a long time and will contribute to the environment your animals live in.

Before purchasing any type of rock it would be wise to research the type of fish you have and the water condition you want to maintain.

It’s also important to clean every stone from debris and bacteria before setting it into the tank, even if you bought it from specialized shops, you don’t know what components might have gathered on the surface as they sat on the shelves and you definitely don’t want that stuff in your fish environment.

Rocks to avoid in your freshwater tank

On the other side of the coin, there are some rocks that should preferably be avoided. In the case of freshwater aquariums, this, unfortunately, includes live rocks for all the reasons already explained.

Whether you have a saltwater or a freshwater tank, you should refrain from adding stones you picked up outside to your aquarium, unless you’re able to precisely identify the type of rock and their components to make sure it won’t be a harmful addition to your tank.

Sharp stones and stones that easily break apart into tiny pieces are also not safe as they could potentially harm your fish in different ways.

Can I use live rocks in my freshwater tank? 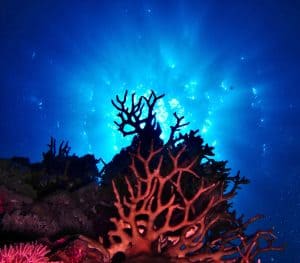 It’s not strictly forbidden to use live rocks in freshwater tanks, but it wouldn’t be a good idea.

It’s simply not worthy to complicate your tank maintenance and to put at risk your aquarium environment just for aesthetic purposes.

You would have to sacrifice the ecosystem of the live rock and potentially harm your fish at the same time, which is not something an animal lover would ever do.

Dry rocks aren’t much safer, but they could make a fair compromise if you really don’t want to renounce to this “decoration”. However, you’ll need to buy the right instruments to keep the water pH under control.

Keep in mind that a dry rock in a freshwater aquarium will remain a dry rock because there’s no way for organisms to grow on it.

All in all, with the great variety of freshwater-safe stones on the market, there’s really no reason to be reckless. Your fish won’t mind a less fancy tank, but they will surely appreciate a healthy environment!