Protein skimmers are a useful tool for reefers and the market for this family of products has been growing exponentially over the years.

You can use a protein skimmer in every type of aquarium— however, depending on the skimmer category and on your aquarium, it might not always be as effective as you hope for, so it’s important to make an informed choice before buying.

What does a protein skimmer do?

The purpose of a protein skimmer is to remove organic waste materials from the water of your aquarium. Waste materials can be anything your reef creatures produce, from excrements to food leftovers.

If left in the aquarium, these materials will contribute to turn the water from clear blue to less appealing colors, such as green and yellow, and will consequently start producing a foul smell. In fact, the protein waste left in the water will break down and will gradually create an environment that is not healthy for your animals and could even prevent them from growing properly.

How does a protein skimmer work? 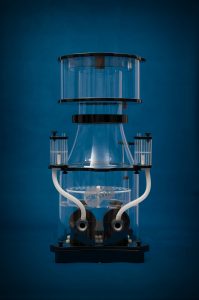 The science behind the mechanism of a protein skimmer is quite complicated, but luckily you don’t need to know any of it.

In simple terms, a protein skimmer works by injecting thousands of air bubbles into a column of water. Organic waste, and especially proteins, are attracted to these bubbles and tend to gather on their surface. These materials then rise up through the column and turn into a dark brown foam on the surface.

This waste foam is known as Skim or Skimmate and it gets pushed through the neck of the protein skimmer and then collected into a cup, ready to be thrown out.

You may notice that the smell of this waste foam is similar to the smell of unfiltered water once it starts to turn yellowish. That means that organic waste is starting to break down and release dangerous components in the water, such as ammonia, nitrite, and nitrate.

The tank skimmer collects these proteins before they break down and keeps your aquarium environment safe and healthy. 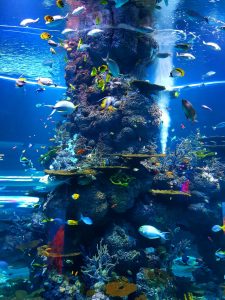 There’s an ongoing debate about the use of skimmers for freshwater tanks. Some hobbyists will tell you it’s completely useless and it’s one way of seeing it, but it’s not completely true.

The thing is, you can actually use a protein skimmer in a freshwater tank and get some kind of result, but you’ll never make full use of it.

Freshwater doesn’t foam as much and as quickly as saltwater, therefore the core function of the skimmer can’t be fully exploited in this kind of aquarium.

However, it might be useful if you have a lot of plants in your tank because the organic waste and the dead leaves tend to decompose into a greasy film on the surface of the water — by agitating the water, the tank skimmer can help remove the film and also increase the oxygen inside the aquarium.

Despite this, it isn’t really worth the price of a new skimmer. If you happen to have a protein skimmer lying around, you surely can make good use of it, but if you’re considering a purchase for your freshwater aquarium, it would be a waste of money. There are more effective ways of filtering a freshwater aquarium, for example, biological filters like activated carbon.

There are protein skimmers for all kinds of aquariums and wallets. The bigger skimmer you’ll get, the more efficient it will be in keeping your aquarium clean. However, most hobbyists will get a skimmer to put in their sump or in their home tank, so its size is usually under 24cm.

The market for protein skimmers is wide and rich, but we can group all of them into three main categories.

Usually regarded as the cheapest type of protein skimmer you can find. They’re also the ancestors of all the protein skimmers we have today. If you don’t have a sump or can’t afford an expensive protein skimmer, an in-tank skimmer might be the solution for you.

Their application is as easy as the name implies: it’s enough to place them inside the tank and let them do their work. However, they’re much less powerful than other types of protein skimmers, occupy a great deal of tank space and can also ruin the aesthetic of your aquarium — if you mind this sort of thing.

As the name says, this type of protein skimmer is to be hung on the back of your aquarium. If you don’t have a sump but you don’t want to give up on a powerful protein skimmer, the Hang On Back may be the skimmer for you.

It works by pulling water into the skimmer and injecting it with air bubbles as it flows up into the main chamber; the clean water then flows back out into the aquarium, while the foam floats up the chamber and out in the collection cup.

Hang On Back skimmers are a good alternative for In-Sump skimmers, but they can be quite expensive and an eyesore if exposed on the sides of your tank, so if you have a sump, it would be better to buy an In-Sump skimmer.

The most loved and the most used type of protein skimmer is the In-Sump skimmer. Setting a sump for your aquarium is costly, but will give you the most benefits in the long run so if you have the chance, you should totally get one.

A sump gives you complete control over your tank, you can store your equipment in there and it gives you a safe space to pour your additives before they reach the display tank.

In a sump you can set any protein skimmer you like and In-Sump protein skimmers are considered the most powerful, as they can process hundreds of gallons of water per hour and therefore get rid of a bigger amount of organic waste than any other type of skimmer.

The current market is almost saturated with In-Sump skimmers, so you’ll be able to find one that best fits your requirements and budget with no problems.

Can I use a protein skimmer in my freshwater tank? 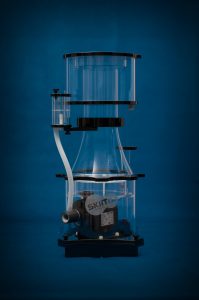 You can use a protein skimmer in any aquarium, but you may not be able to make full use of it in freshwater aquariums because freshwater doesn’t foam as well as saltwater does.

Still, it might help you keep a good oxygen level and if you have fishes that used to live in very fresh river water, they might benefit from a skimmer because it helps reduce the number of bacteria in the water.

Is it necessary to have a protein skimmer? No, but it makes your life much easier and it helps you keep the parameters of your aquarium under check.

It also depends on the kind of aquarium you want to keep: if you plan to keep a small tank with only soft corals, you don’t really need a skimmer. For bigger purposes though, it might be useful if not necessary.