Aquariums are a beautiful hobby that requires a lot of care on our part. It’s important to create the perfect environment for our reef animals to live in, starting from the quality of the water.

There are several products on the market that can help us keep our water well-filtered and clear.

Purigen and Activated Carbon are two of the most used products by hobbyists with this goal. Though they are both used to clear reef tanks water from impurities, they’re not interchangeable and before you purchase either it’s better to make an informed choice depending on your aquarium and on your needs. 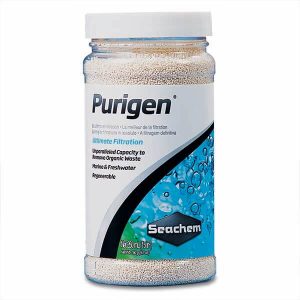 Purigen in reef tanks is used as a chemical filter to remove organic impurities from the water. It’s a synthetic polymer that controls ammonia, nitrate, and nitrite levels which can be harmful to your tank environment.

This product doesn’t remove the molecules directly, but rather eliminates the compounds before they can decompose into them. It also reduces water pollution and helps against the discoloration of the water. Its effect is already evident after only a few hours from the first use.

It presents itself as a white grain-like powder that usually comes in small sealed bags that are already portioned and ready-to-use. However, it’s also available in large packages for those hobbyists who want to personally control the amount of product they use in their tanks.

The peculiarity of this product is that it changes color gradually as its absorbing power decreases, which makes it very easy to know when it’s time to change it. Usually, a single 100 ml bag of Purigen can last up to six months.

How To Use Purigen

Purigen can be used in any type of filter, be it internal, external, or in the sump. If you purchased the 100 ml sealed bag, it’s enough to insert it in the filter and let it work. As a general rule, it would be better to place this product in a spot where there’s good current.

If you have loose material, please make sure to evaluate carefully how much Purigen is recommended for your tank size before using it. In this case, you should pour the right amount of product into a filter bag, but not just any filter bag will do.

The filter bag should be approximately the right size for the amount of Purigen you need and the mesh shouldn’t be too large, so as to prevent the particles from escaping. The filter bag should also be chlorine-proof, as it will be fundamental when you’re regenerating the material.

How To Regenerate Purigen

One of the reasons Purigen is very much loved by aquarium-owners all over the world is its regenerating feature.

When the material has turned brown or black, it means it’s time for a change. This makes it easier to keep your reef tank perfectly healthy and clean.

– Make sure to use all safety precautions necessary to handle bleach and to be in a well-ventilated space;

– Soak the filter bag for 24 hours into a non-metallic container filled with 50% of water and for the other 50% of household chlorine bleach;

– After 12 hours, turn the bag upside down or, in the case of loose product, gently stir the Purigen to make sure every last particle is well-immersed in the bleach;

– After 24 hours, when the Purigen is back to its original white color, rinse the bag carefully and thoroughly under the tap;

– Following step for saltwater: soak for 8 hours in a solution of 2 tablespoons of de-chlorinator per cup of water;

– Following step for freshwater: soak for 4 hours in a solution of 1 tablespoon of buffer per cup of water;

– Rinse carefully under the tap;

If the product still smells like chlorine, repeat all the above steps until the smell is no longer noticeable.

What Is Activated Carbon? 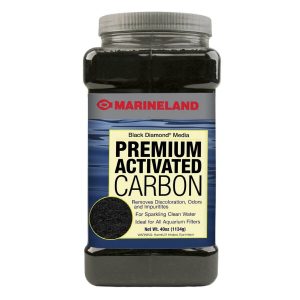 Activated Carbon is a carbon-derived material that has been processed to increase its absorbent properties.

It’s usually derived from charcoal and it’s used in a wide variety of fields, from medical uses to chemical purification.

It’s widely used by reefers because of its depurative qualities, as it removes all general impurities from the water, such as decomposed organics, contaminants, foul odors, toxins emitted by corals and algae. It also fights the discoloration of the water and restores its pigment to the desired crystal blue.

Activated Carbon comes in small black pellets or grains and is mostly used loose, but can also be found in portioned bottles with a ratio chart per gallon of water written on the packaging.

Many old-time hobbyists are fond of this product and mistrust any other product of the same category, such as Purigen. Actually, Activated Carbon works in a very similar way to Purigen, except that it purifies the water from a wider range of components.

However, its indiscriminate removal may cause the loss of some beneficial elements to your tank environment as well, for example, nutrients that corals can consume.

How To Use Activated Carbon In An Aquarium

Activated Carbon should be rinsed under the tap before using, making sure not to rub or grind the pellets in any way as it would only produce more dust to remove. Once the water runs clear through your filter sock, the carbon is ready to use.

The easiest and cheapest way to use carbon in a reef tank is to pour the material into a filter sock and place it on the bottom of the tank; alternatively, it can be put directly inside a large variety of water filters, in a Carbon Tube or in a Trickle Filter tray. In order for it to be most effective, water should flow over/through the carbon continuously, so make sure to place it in a high flow area of your tank.

The amount to use depends on the size of your aquarium and in the case of activated carbon, less is more. In fact, it’s highly recommended to use the least amount possible of carbon and change it often to keep your aquarium healthy and color free.

Carbon doesn’t change color, so there’s no visual way of knowing when it has exhausted its absorbing properties and you’ll need to figure it out on your own. The most evident sign that the carbon isn’t working anymore is when the water starts having a yellowish pigment to it.

Activated Carbon can be used in both freshwater and saltwater aquariums. However, there are some concerns regarding carbon use in the latter.

Activated Carbon In A Saltwater Aquarium

As mentioned earlier, carbon doesn’t discriminate between the elements to filter. Unfortunately, this means some trace elements needed by reef animals in saltwater aquariums may be eliminated along with the rest.

If you’re concerned about the loss of trace elements, you might want to reduce the use of activated carbon in your tank. Alternatively, you can add trace elements supplements along with the carbon and keep the filter sock away from high flow areas for a short time, so as to give your reef animals the time to absorb the supplements.

Another issue is related to how the carbon often leaches phosphate into the water.

You need to avoid accumulating high levels of phosphate into your saltwater tank because this element leads to the aggressive growth of algae, specifically brown algae in the tissue of corals that can cause the coral itself to turn brown and prevent its skeleton from growing.

To avoid this issue, you should test the carbon you’re currently using and if it’s revealed to contain high levels of phosphate, try another brand. Another solution would be to use a phosphate removing product along with activated carbon.

Should I Use Purigen Or Carbon? 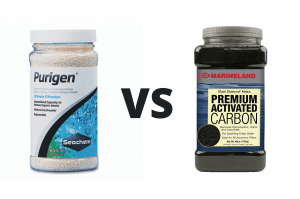 The difference between Purigen and Carbon is minimal and it’s reduced to their economic and time-consuming aspects.

Purigen might be cheaper because it can be regenerated, but depending on the quality of your local water, you might need a stronger filtering product. Also, the regeneration process takes time.

Carbon has a higher filtering capacity and depending on the brand can also be very cheap; however, it needs to be changed often and as such can be highly polluting.

The choice between these two products should be made after careful consideration of your personal circumstances, or from your personal experience.

It’s important to remember that adsorbents are not mandatory when owning a reef tank. In fact, if your system is healthy enough without any of them, you could just only need a protein skimmer.

As such, the use of these products doesn’t have to be continuous and it’s highly recommended to use either Purigen or Carbon only when strictly necessary.